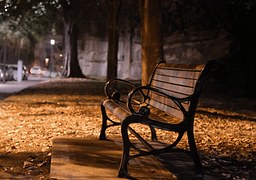 The air was still heavy with humidity. 10:30 pm and the temperature was still hovering around 98 degrees. I had decided to walk the short distance because I was confident it would be much cooler by now. Seriously it was October 1st and it felt like the middle of summer. My heels were killing me. I wanted to take them off, but without street lights my fear of stepping on something disgusting kept them on.

I didn’t need an alarm clock, not once I had children. Prior to that time, an alarm clock was a necessity. Now that the girls were in school, my own body clock woke me everyday without fail around 6:30 am. The sun wasn’t quite up yet. We still had another month before we moved the clocks an hour backwards. The darker sky always made rising a little more difficult. My husband snored soundly next to me. Getting up with the girls wasn’t something he ever did and I had given up trying. I made my way upstairs, carefully kissed each of my sweet daughters, rubbing their backs and instructing them to get up for school. They never complained, not yet any way.

I took my time walking. The cooler temperatures indoors should have made me pick up my pace, but I couldn’t face home yet. Having just spent several hours in the company of eleven other women made me question my judgement. This happened every month, every first Wednesday. It had happened for the past ten years, ever since we started meeting. The sighing came naturally and without much thought. I was just happy to be alone so no one could question my mood. Somehow I always managed to stay lighthearted on these nights. Even after all of these years, no one had ever looked beyond the surface to see the unhappiness behind the eyes.

Breakfast was always a quiet time at our home. I read the paper, the girls ate and it wasn’t until they were finished any of us were awake enough to talk. Quickly upstairs to finish getting ready for school, I cleaned up the kitchen while they finished. I had already been up an hour and my husband, their dad was still in bed. I had stopped resenting his lack of help in the morning and had begun to cherish my time alone with the girls. There was something almost sacred about those morning hours. There hadn’t been a chance to muddy the day with worries or responsibilities that at times felt overwhelming as I faced them alone. We lived close to the school, but it was my joy to walk them through the park, over the creek bridge and through the small grove of trees that separated us from the school. A quick kiss and hug, and they headed off for the last of the walk alone.

However, I had hoped someone would remember, but no. The evening transpired like always. We chatted, got ourselves a beverage and took our places at one of the three tables. The night was punctuated with yells of delight as someone had rolled three sixes, a bunco. When had first gathered to play this silly game of bunco, we focused on the game and seemed to complete many rounds. If we won, we moved to the next table, losers stayed. But as the years passed, we played fewer games and spent the majority of the evening talking. My feet wouldn’t make it much further in these heels. I needed to pick up my pace if possible. I was surprised to find myself filled with disappointment. I was almost 40 years old, much too mature to be disappointed over something so childish. However, I had hoped someone would remember, but no.

My husband was waiting for me when I came back from dropping the girls off at school. He was waiting for me to make him breakfast. He wasn’t much of a talker and while he read the paper religiously, he never really expressed any opinion about the world, national or even local politics. He announced he had made plans to meet friends that day. They were going to have lunch and go look at the newest boats. As a pilot he was often off during the week and this enabled him to meet his fellow pilot friends. He never asked me what my plans were for the day. He never did. I swear I could feel the crack in my heart grow. My day was spent at home with the typical responsibilities you’d expect a full-time mother and wife to have.

Turning the corner I could see my house. My shirt was now dampened all down my back and clung between my breasts. I made the last of the walk without my shoes. The pain finally over ruled my fear of stepping into something I’d regret. I couldn’t bring myself to go inside, not yet. I sat on the bench in our yard and looked at the sky. It was cloudy so the stars weren’t visible and it made for a darker night. Was that a message? The darkness of the night? I couldn’t see a point of light anywhere. I could feel the tears begin and I fought with all I had to hold them in, but to no avail. I sat on that bench as it neared 11 pm that Wednesday night. Crying for what I had didn’t have and crying for the blessing I did have.

After school was filled with homework, snacks and dinner. The girls talked animatedly about their day. I never failed to ask the same two questions. What was the most interesting or unusual thing you learned today. And what was the silliest thing you learned or did today. Those questions always managed to bring forth a fount of information. I had learned early on the simple how was school, never elicited more than a blank yes or no. The three of us had a lively conversation and after dinner I waited, but nothing. My husband left the table, grabbed a beer and headed upstairs to his home theater. The girls were old enough I didn’t need to leave written instructions for my husband but I did it anyway.

Now sitting on the bench, I realized I had to make a decision. Would I continue to live a life that on the surface looked wonderful but underneath was empty and lacking in love? My gut said it was time to go, to leave. My heart said I was being silly to be upset over something so childish. My head argued back that this was not a one time oversight. This happened year after year  and it was a sign of something deeper. Just like the darkened, starless night was speaking to me and telling me there would be no light in my life as long as I stayed. My heart spoke back reminding me of my beautiful children, comfortable life and the promise I had made all those years ago. My heart said I was being superficial. My head said it was just another strong message of how little I was valued. All I knew, was at that moment I couldn’t make any decision. All I could do was pick up my shoes, unlock the door and head upstairs for a quick shower. I would consider everything tomorrow in the light of the day. I would reexamine my life but not today, not on my birthday.