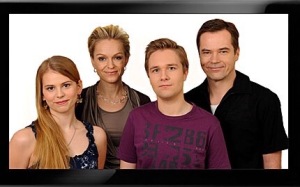 As part of my Experience Passport I am watching 3 foreign language movies. I watched Farewell my Queen. It is a French film. But rather than selecting another movie, I decided to watch some episodes of a foreign TV show. As a subscriber to AcornTv, I chose Helppo elämä, a Finnish TV show.

Immediately I realized that nothing about the language sounded remotely familiar. Of course there are subtitles, but I didn’t expect the language to sound so “foreign”. I know that sounds silly but I’ve tried to learn French since I was 12 and I live in Texas so I hear Spanish everyday. I also hear variations of other languages but Finnish is definitely the most unique language I’ve heard.

I searched online and learned it is most closely related to Estonian and Hungarian. Now my ignorance of geography was highlighted. I had assumed because Finland is Scandinavian that the language would be related to Norwegian, Danish or Swedish. I pulled up a map and saw that Finland is just north of Estonia and a mere 240 miles (approximate). That is half the distance from Austin to El Paso. Now it made sense.

The storyline is unusual. It follows a family in which the father is a criminal because he has a 4 million € tax debt and therefore can’t hold a regular job. Each family member has problems including a strangely vindictive mother. What I have found most unusual aside from the language, is that everyone is white. Living in a multi-cultural and multi-racial country makes life like a beautiful quilt and each piece is different and unique. I’m not criticizing the show because there are a lot of countries that are not racially diverse. And as we have slowly learned in the US, television should be a reflection of the people. While we aren’t there yet, we do have more diversity now than when I was growing up a 1,000 years ago.

It’s been fun watching a culture that sounds so different but looks so similar in clothing, furnishings and autos. Lots of Volvos and VWs. Take a chance and view the world through a new and wider lens.