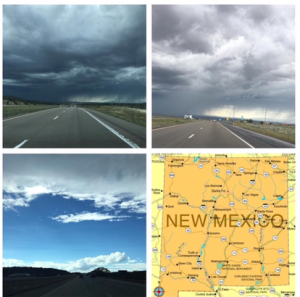 Someone I love has cancer and has begun a rigorous routine of chemotherapy. Before my divorce, I would have purchased a ticket and flown west to Las Vegas, NV. My family has lived there for almost 43 years. I’ve only made the full round trip road adventure once prior to this time when my dad died. Then I had a husband and daughter who could help with the drive. This time it was me and my cat.
There isn’t much between central Texas and Southern Nevada. There are long stretches of road which appear endless. And in many areas there is no radio reception. It gives you time for a lot of introspection. The first day was 12 hours. Albuquerque was my destination for the night. About an hour outside the city, the sky grew dark and it rained, hard. I was already tired and my cat was beginning to get restless in his kennel. Heavy rain just added to my already high stress level. But before long, the sky began to grow light and then it turned the most brilliant shade of blue.

It occurred to me this storm is a representation of my life the past few years. I lived with an ugly storm building on the horizon and when it hit, it had 30 years of hurt and heartache raining down. It came close to destroying me. Then slowly, very slowly I began to see a break in the storm. I could hear the faint calling of God’s voice telling me not to give up. And now, even though my loved one is facing cancer, I can see blue sky.

The blue sky of hope is calling my name. It reminds me of the story in Luke 8. Jesus is asleep on the boat when a storm hits. The disciples ran to him because they feared drowning. He utters a word and the sea and sky are calm. That is where I made my crucial mistake. I was so caught up in the drama, fear and pain of my storm I forgot to turn to Jesus. But thankfully our God is patient and he waited for me to turn around and call upon his name.